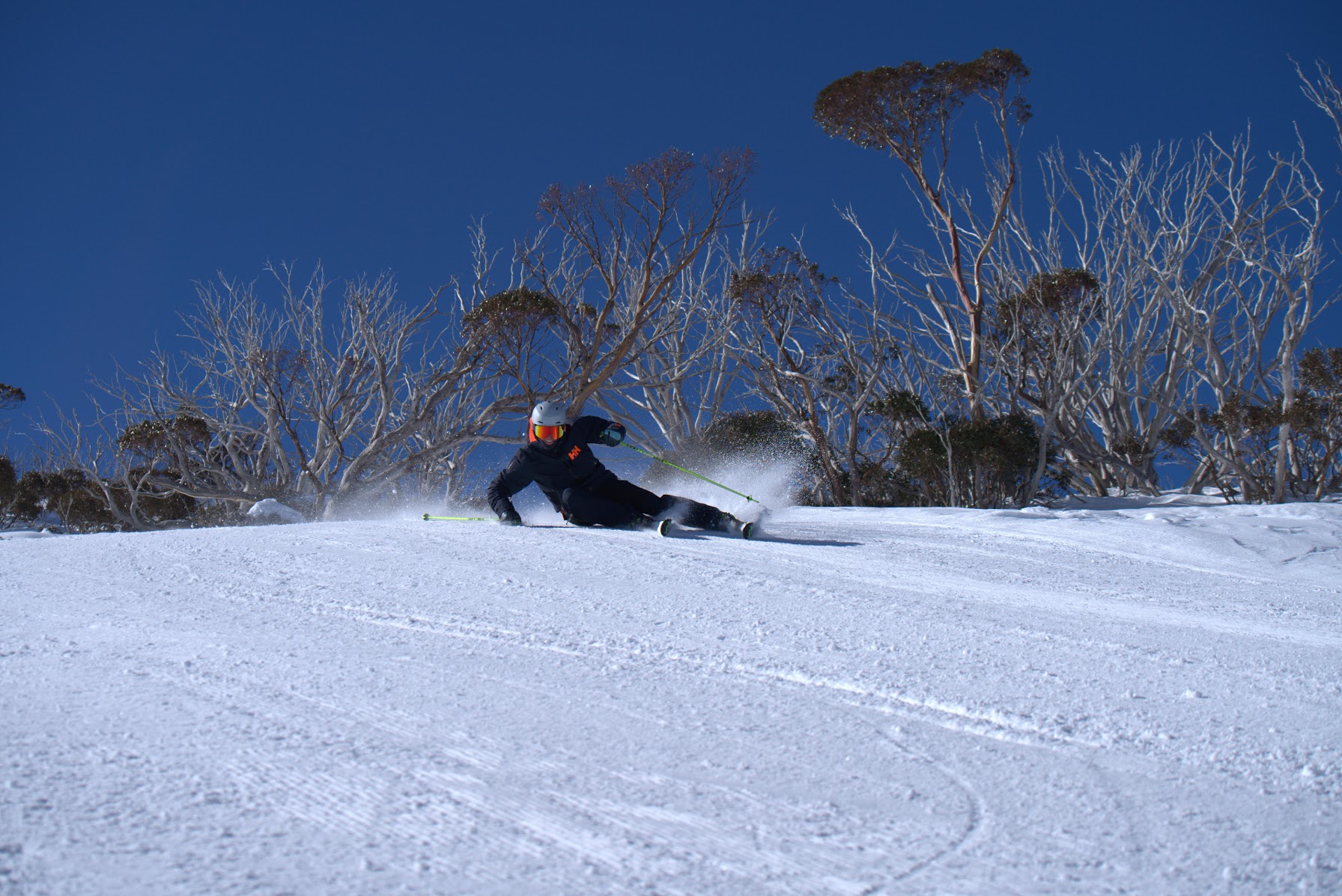 Why can't I get bigger edge angles skiing?

There is a point in carving turns where it feels more difficult or scary to achieve greater edge angles. For simplifying this post am roughly saying beyond where your your boots are tilted about 45 degrees to the slope. Perhaps you've noticed in video of you "ripping" down the groomers and feeling like you're just inches from the ground you see it's actually much further away. You're barely tipped over at all. Why is this? Is it a matter of fear? Is it a lack of strength? What other factors could be at play? I'd like to share one insight around this particular frustration point in getting your skis tipped over further.

Firstly why is it something you want to even bother pursuing? What is the reward for taking the risk? What do you gain by moving yourself further inside each turn past 45 degrees? Beyond this point you're really either going to make it or break it and fall could really hurt. And if you're not a ski racer and don't need to win a race  what's the big  deal? The reward I believe is this; greater control of your turn shape whilst still riding a stable carving ski. Remember turn shape is what gives you speed control so having control whilst carving on steeper slopes is the goal for most skiers.

You need to understand that there are only two ways to make a ski turn tighter. One you twist it or two you tip it on its side further over so it can bend more. Twisting the ski is fine and necessary in certain situations but it creates friction and is less stable as the tail of the ski is not following a similar path to the tip of the ski. Not great for higher speeds. Tipping the skis over to higher edge angles allows us to keep the skis stable so how come it produces a tighter turn? It's because of the parabolic shape of the skis. The hourglass shape allows you to bend the middle of the ski but only when it is really titled over. Look at the photo below to see how little the ski bends at roughly 45 degrees to the slope. 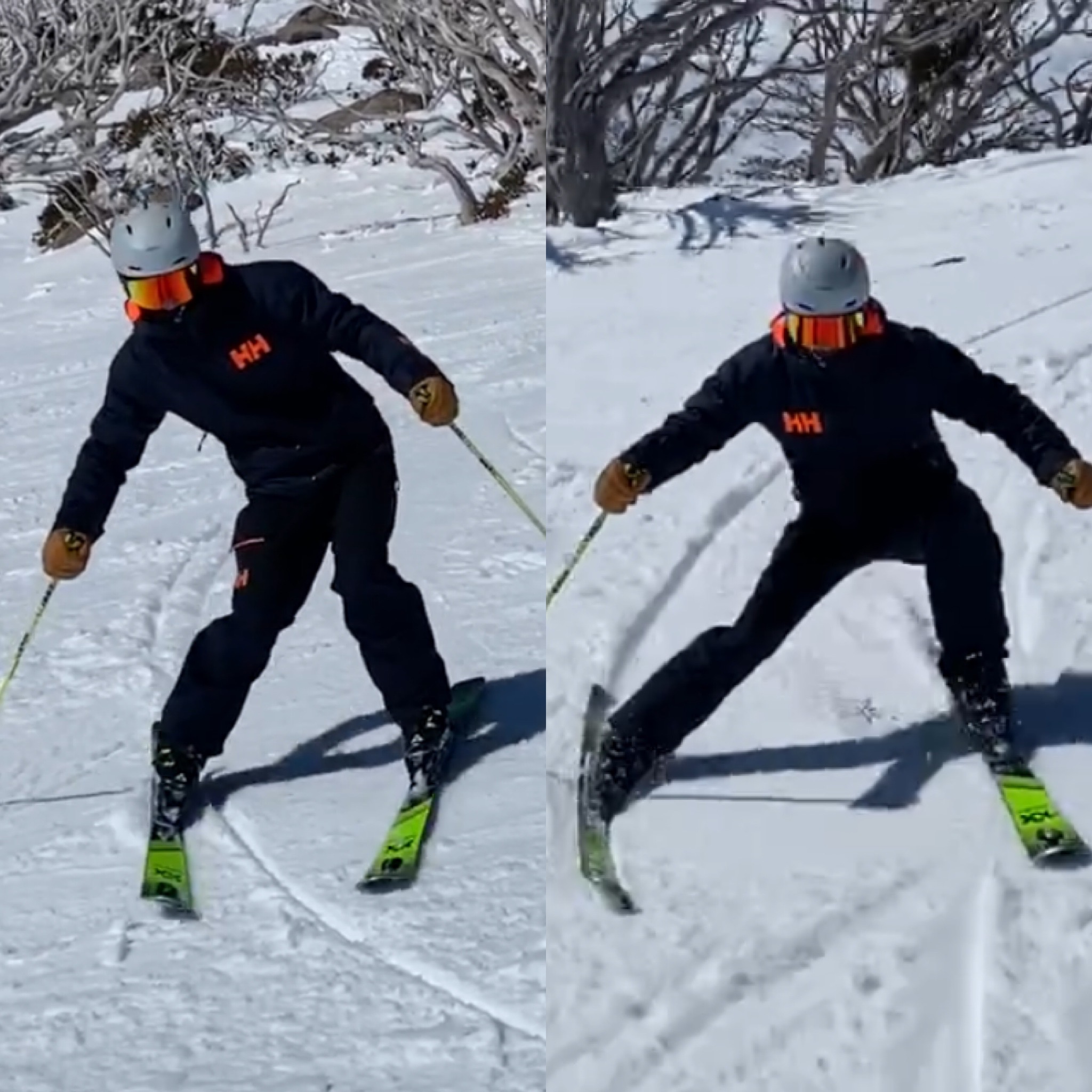 Notice the difference in how much the ski bends between these two shots. The left shot is about 45 degrees and yet the ski is hardly bending. Pushing on it more wont help to bend the ski either. Compare that with the right photo where the ski is at ~60 and you start to see the ski flex into a shape that helps your turns become tighter.* I am only going about 10km/h for this demo.

The image above shows how much more the ski starts to flex and turn by itself when the angle increases past about 45 degrees. If the ski clearly turns more whilst still carving why are skiers not tipping those bad boys over? Why is it that a lot of skiers I see struggle to get beyond this point? Well here is one thing to consider. The feeling of what it's like edging past 45 degrees is more like dropping down. Falling. This is as opposed to the sensation of moving sideways which is what the first 45 degrees feels like. See the next picture to visualise this difference. 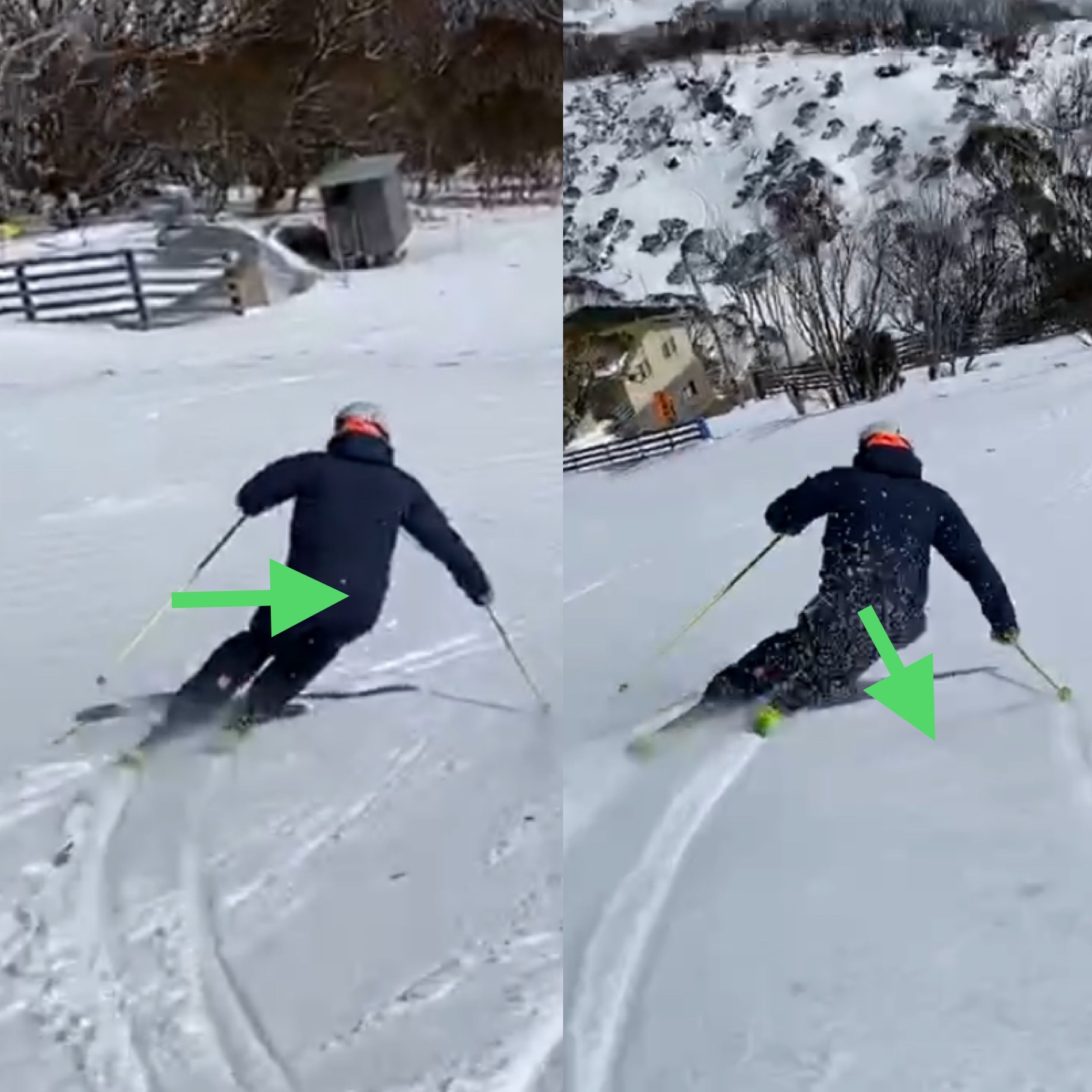 Pic 1 Tilting the skis over for the first part feels more like you are moving sideways.  Pic 2 Beyond this point the SENSATION and movement becomes more in a downward direction like the arrow shows. Lateral balance must be refined through this phase.

The tilting further part is really quite scary because you are moving further away from your base of support. Outside of skiing there are not many positive outcomes that result from you deliberately falling. Yet This bigger edge angles part of skiing requires you trust in this falling  sensation part in order to continue tilting your skis to bend them. In order to help comprehend this change in motion going more towards falling try this. Visualise your ski pole  standing upright then falling over. The first half of falling the handle of the pole (like your head) moves mostly sideways with a little bit of down. The second half of that fall the handle accelerates more downwards than sideways. So you would be experiencing similar motions to the ski pole. The first part feeling relatively slower to tilt, the second half of moving inside the turn is faster as gravity is able to pull you to earth more easily. Closer to free falling. Which is why this part feels the best but is the scariest and hardest to do! As long as the ski bends and the edges hold turning forces will hold you up and keep you balanced. Thats where trust in the process and practice comes in.

Try practising off snow edging beyond 45 degrees and you'll soon feel you just fall over. But take notice of how you can move slowly for the first part and then things speed up very fast thanks to gravity's  9.8m/s2 the further you go. The trick I believe is trying to allow some of this gravity dropping sensation to occur in your carved turns to help drive the higher degrees of your edges angles. 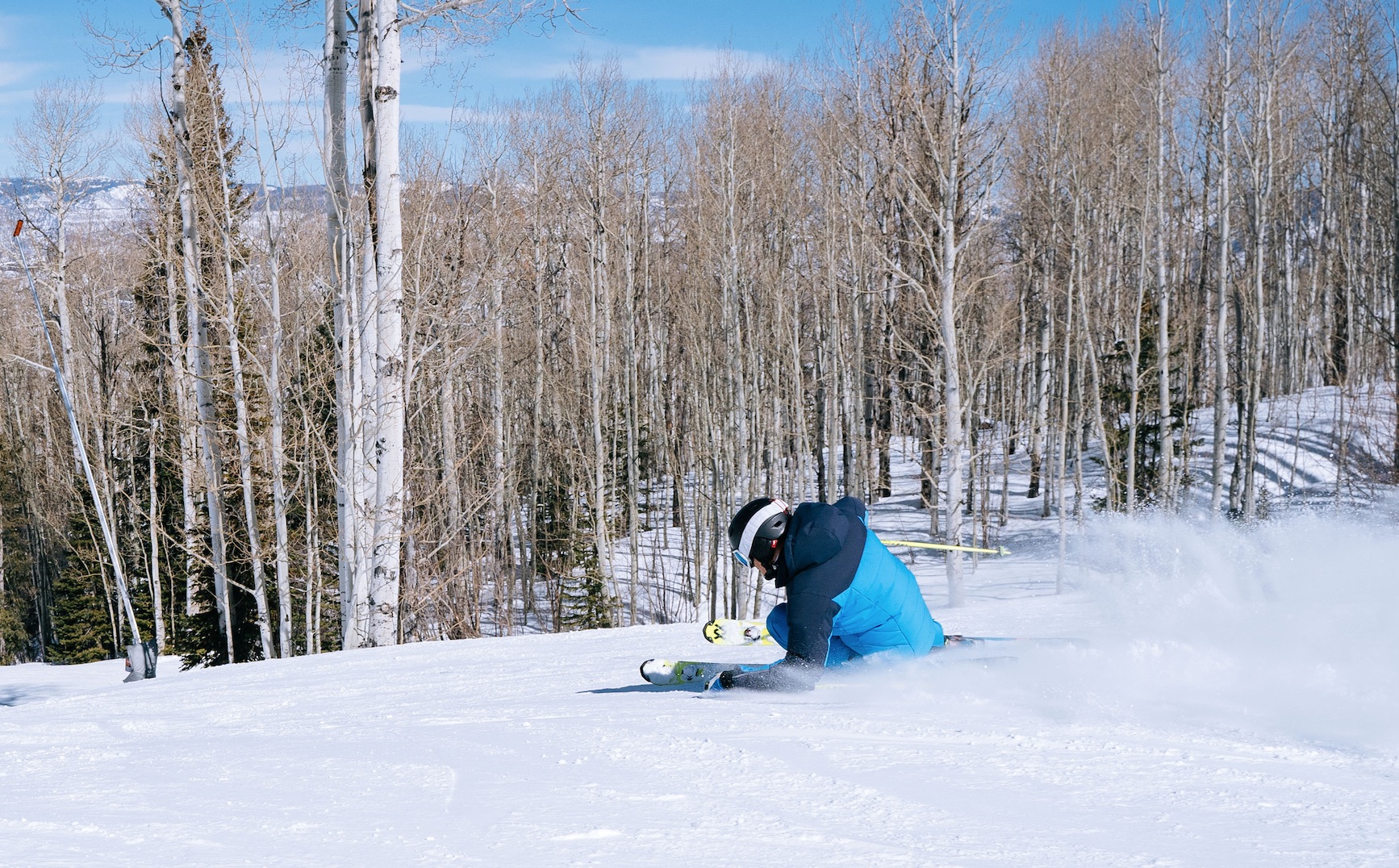 For me I love the feeling of gravity driving me into higher edge angles. It's a feeling of controlled free falling that results in a catch with the skis as they bend and arc you around the corner. It takes 100's of hours of practice to fine tune but you must be willing to play with your skiing and take a risk to get the reward.

At this point I will point out a common mistake people make as they work on this "lowering" sensation. Because we sense getting lower mostly through where our head is in space people will try to get lower by bending at the hips to "feel lower". Your head drops and changes its position but the skis do not tilt further. Be mindful of this trap. You may also try to "feel lower" by bending both legs. Your outside leg isn't really bending at all.  Yes your inside leg bends to allow your body to get lower but it can be difficult to distinguish bending only one leg. Many people when trying this bend both legs like in a squat as this is the only other relatable movement they have to work from. It is also due to the fact I pointed out earlier; you will be lowering/toppling quickly because gravity can pull you down more easily and your brain thinks "there is nothing ready to support us if we keep going! So lets just bend forward to feel lower."  But there are supporting forces as you tilt coming from the ski turning sharper. Invisible physics forces that are the same forces holding up Grand Prix motor bike riders and skate boarders riding a bowl. So pay attention to your outside quad muscles and try not to allow them to soften and bend the knee. Think that your outside leg is to be more like your ski pole, strong and straight as it tilts. 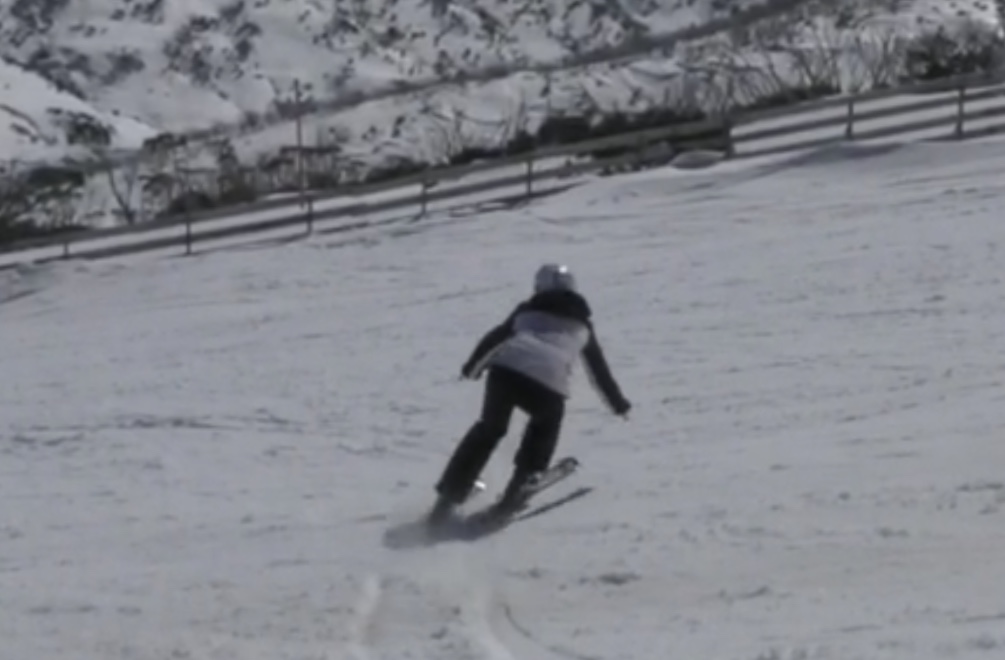 Common mistake: "Feeling lower" through bending at waist and outside knee.  You do sense being lower but the skis don't increase edge angle and therefore don't bend much.

There are several other factors you need to consider in order for this tilting past 45 degrees to work out well for you. More than this blog article has time for. Factors like fore and aft balance, speed, radius of the ski, etc. But I hope that this article has helped you perceive what you might be searching to feel for with your body in motion when carving at higher edge angles. Also it may have been surprising to see how little the ski actually bends even at around 45 degrees. Perhaps it will give you incentive to try and push the speed and edge angles a little more.  Get to the point where you really feel the ski flex. It's an addictive rush of adrenaline. If you liked this article and are interested in learning more about skiing from my perspective I have a library of ski technique videos on everything from bumps to carving. All aimed to make you a better skier. Enjoy your turns.